I was really excited to be invited to the Premier of Tainted Getaway to review the movie by the very talented producer Rod Manikam.

Rodney has been a friend of mine for many years and I’ve followed his career from his debut movie “Wild Justice” to his 6th production “Tainted Getaway” which premiered on October 20th in Perth Western Australia.  I am really so proud of this amazing guy.

Firstly I was so delighted to see a movie based in my beautiful home town of Perth, Western Australia and see the wonderful scenery so familiar to us locals. Without giving too much of the plot away- there is a great twist to this kidnapping movie.  The main roles are played by the beautiful Chloe Brown and the very handsome Tyson Barry (pictured below centre).   Both play their roles extraordinarily well and become a much liked duo by the end of the movie as scripted by Desmond Hew.  I can tell you, that these two actors are both as gorgeous in real life too. There are of course a few baddies in the movie-John Mc Pherson who plays the bad cop (pictured below left) and Mark De Vattimo who plays Mason- and I will say that unless I met these two guys personally and realised how amazingly friendly and down to earth they both were, I would have left for the evening really resenting these characters.  So well done guys, you did so much justice to these roles.  There was also a real outstanding performance by actor and film maker Jag Pannu. 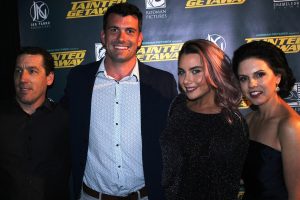 I couldn’t possibly mention everyone that acted in this great movie individually, however, it was well cast and all the actors did an amazing job.  It’s wonderful to see such great local talent with all roles except for the main female cop (very well played by Amanda Dow of Hollywood-pictured below right), being filled with actors from Perth.   I did want to mention a few smaller roles played by two brothers, James and Cris Broadhurst who played a policeman and transit officer respectively, who are also friends and of whom we’ve often referred to  as “the Hemsworth bros” given that they are brothers who both act and also are real easy on the eye.  Well done guys!

In fact, for many people like me, (and I say this in reference to mostly women), who don’t normally gravitate toward movies with violence, the producers have cleverly cast some pretty hot guys.  So you can rise above the violence and have 2 hours to check out the eye candy.